Welcome to the Mu Mon Kai Iaido Open Taikai, an event designed for learning & community building through
Each tournament, we try to provide a unique and educational experience for new and returning participants. In 2016 we focused on a new team competition format, this year the focus will be on “More Practice” by providing more matches, more judging opportunities, and more support behind-the-scenes.

A sneak peak at the changes for this year include a return to the group stage format for individuals, that guarantees a minimum of 2 matches per participant, before elimination, and an opportunity for anyone 3-Dan+ to practice judging matches.

We look forward to seeing you in December.

Mu Mon Kai, in conjunction with the Japanese Canadian Cultural Centre in Toronto, are proud to introduce the 2nd Mu Mon Kai Iaido Open Taikai. The team that brought you the '08, '09, '11 Ontario Iaido Opens, the '10 Canadian Iaido Open, '12 MMK Open, and '13 Canadian National Iaido Championships will be raising the bar once again this year with the introduction

Participants can look forward to learning how Iaido competitions can help develop your awareness (watching high-level Iai), judgement (making objective win-lose decisions), and abilities (motivating each other to focus and strive for greatness). 4 Dan and up will be called upon to referee matches below their ranks.

This event will be used as preparation for the 2016 Canadian National Iaido Championships coming in September in Montreal, QC. Looking forward to seeing you there!

The Taikai was a huge success with 55 competitors from all over Canada and the United States. We renewed friendships and battled as equals, proudly exhibiting the three core visions of Mu Mon Kai: Discovery (promoting Iaido), Empowerment (providing opportunity to succeed), and Fellowship (building a strong community).

The enthusiasm and generosity of all the referees, participants, and volunteers was amazing. We couldn't have done it without you all and will call upon you again to make the future even better! 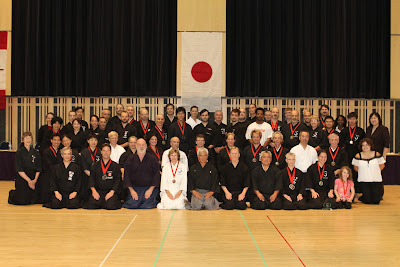 I'd like to take this opportunity to thank a few people who's support has made this event so rewarding.

Mu Mon Kai, in conjunction with the Japanese Canadian Cultural Centre in Toronto, are proud to introduce the 1st Mu Mon Kai Iaido Open Taikai. The team that brought you the '08, '09, '11 Ontario Iaido Opens and the '10 Canadian Iaido Open will be raising the bar this year, producing the most authentic Iaido taikai experience outside Japan.

Participants can look forward to a full day of Iaido competition, Koryu demonstrations, and vendors available for equipment purchase. 4 Dan and up may also be asked to referee some of the lower rank matches. A referee seminar (4 Dan+ only) will be held on Friday night (Sept 14) at the JCCC from 9:15pm to 10:45pm.

This event will be used as preparation for a Canadian National Iaido Taikai coming in the near future. Looking forward to seeing you there!